I'd been meaning to try pressing loose mineral shadows for some time. I finally gave it a go, and am so happy with the result! I decided for my first attempt that I would just use dark colours that I could use as liners, these are colours that I'd never used, so if they didn't work out, I wasn't going to be too upset.
After some research, I decided to press with isopropyl alcohol (I bought from Bunnings) and fractionated coconut oil (ebay). You can use jojoba, but coconut oil keeps longer.
Using a small container, I mixed enough alcohol to dampen the loose shadow. I then doubled that amount of the coconut oil so that I would get a clay or cookie dough consistency. To mix I used the end of a floss stick.
Next step is to scrape the mixture into a shadow pan.
Using a one dollar coin, I then pressed the shadow, making sure to sandwich paper towel between the shadow and the coin. This absorbs any excess moisture.
I then left to dry overnight. (You can speed up this process by heating an oven, switching it off and placing the palette inside)
I found that a small eye shadow jar, often sold as a full size, is enough shadow to fill one pan. For smaller amounts of shadow, I just filled a pan with more than one colour, as you'll probably notice in the pic.
The final result? 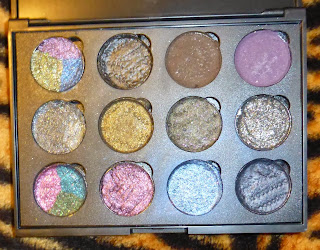 Initially I was concerned that the shadows might lose their vibrancy, but, I am happy to note that most of the pressed minerals swatched the same as when loose. I found the matte shades don't swatch as well, but I'll still find use for them.
I am certainly going to press more minerals. Although a little messy, I found it fun. I will be sure to post pics of any other palettes that I create :)
Posted by IndieAna at 19:29

IndieAna
Moama, Australia
I am on a mission to find the best beauty related products. I will search high and low, using my shopping skills, willing to undertake the grueling task of trying any company in the hope of finding the Holy Grail of each beauty category ;)